Graveyard of the Pacific

From Tillamook Bay on the Oregon Coast to Cape Scott Provincial Park on Vancouver Island stretches a deadly coastal region known as the Graveyard of the Pacific. Thick fog banks, strong currents and waves, and powerful winds have been the peril of many ships since exploration began in the 15th century.

Download a free map of shipwrecks along the Discovery Trail for a self-guided tour!

Courtesy of the Columbia Pacific Heritage Museum in Ilwaco.

The Graveyard of the Pacific and the Columbia Bar

At the mouth of the Columbia River sits the particularly dangerous Columbia Bar. This sandbar is about 3 miles wide and reaches about 6 miles into the ocean. This navigational nightmare has claimed over 2,000 vessels and 700 lives since 1792.

The mouth of the Columbia has a worldwide reputation. US Coast Guard Station Cape Disappointment responds to hundreds of calls in these dangerous waters. This Coast Guard station is also home to the National Motor Lifeboat School.

The Construction of the Cape Disappointment Lighthouse (1856) and the North Head Lighthouse (1898) reduced the number of shipwrecks that occur at the mouth of the Columbia River. These lighthouses still operate today. 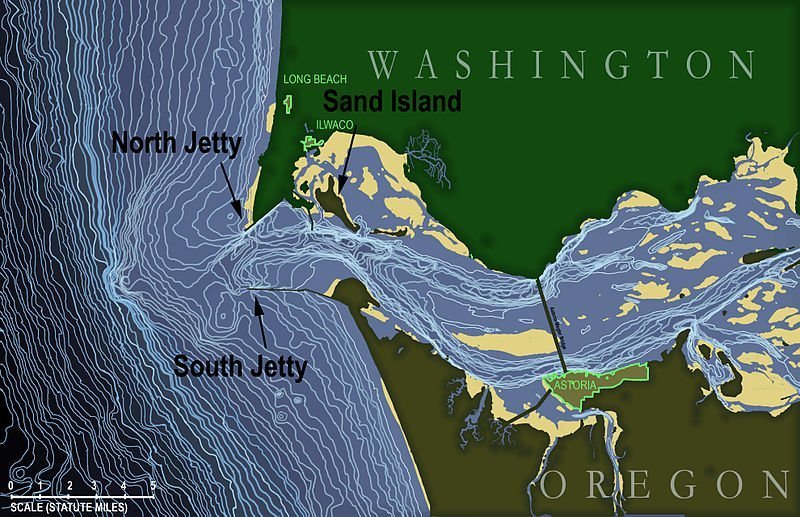 See the Graveyard of the Pacific

The Columbia Pacific Heritage Museum’s current exhibition features photographs, artifacts and first hand accounts from shipwrecks that happened in the area. Graveyard of the Pacific: Dangerous Currents-Shifting Tides will be on display through March 9, 2019. Snag a free copy of Shipwrecks Along the Discovery Trail for a self-guided tour along the peninsula!

Another great place to view the Graveyard of the Pacific is on the McKenzie Head Trail. At the top of this steep trail, you can see the North Jetty as well as Saddle Mountain in the distance. This trail also takes you straight to Battery 247, part of old Fort Canby.

Take a short walk to the North Head Lighthouse for another perspective. During the summer, this lighthouse opens for tours. Call ahead to see when the lighthouse will be open.

The locations are in Cape Disappointment State Park. Check out their downloadable map to find the trailheads or stop by the Visitors Bureau for more information. You will need a Discover Pass.

This Hudson Bay Compay supply ship sank off Sand Island near the mouth of the Columbia River. In 1986, a diver discovered the wreck while trying to free a snagged fishing net. The shipwreck is now an Oregon state archeological site. It is significant for being the only known example of this type of vessel from the era.

This US Naval brig gave the Peacock Spit of the Columbia Bar its name. The captain carefully followed the charts, but the ship still hit the spit. The crew had to abandon the Peacock after hours of trying to free the ship.

A ship captain reported seeing the Vandalia struggling but it did not appear to need help. The ship washed up a week later near McKenzie Head. Four bodies also washed up with the wreck, including Captain E.N. Beard. Beard’s Hollow at Cape Disappointment State Park now bears the captain’s namesake.

Caught in a thick fog bank, the Glenmorag lost its course. It wrecked north of Ocean Park after the crew abandoned ship. William Begg, one of the crewmen, stayed in the area. He married a local and started the first soccer league in Pacific County.

During a storm, a French square-rigged ship, the Alice, ran aground near Ocean Park with 3,000 tons of cement. The entire crew made it to shore, but the cement hardened, causing it to sink deep into the sand. The mast and rigging became a landmark and tourist attraction until about 1930. Today, the Alice makes rare appearances during extreme low tides.

Known as the “ship that walked on land”, the North Bend got stuck on the Peacock Spit and remained there for a year. The waves around the ship began cutting a channel in the sand, leading it into Baker Bay intact.

During a heavy fog, the Admiral Benson became stranded near the Peacock Spit. This wreck is the namesake of Benson Beach at Cape Disappointment State Park. Parts of this ship become visible during extreme low tides.

The Vazloz Vorovsky wrecked on the Columbia Bar with an estimated forty thousand case of lard. A bakery in Astoria bought the lard for four dollars a case.

The army bought this ship in 1942, and it became a passenger liner in the Hawaiian Islands. The ship was set to retire, but as it was being hauled to Astoria, the tow-line broke loose in bad weather. It washed ashore in Ocean Park. Years later, the city bought the masts of the ship and used it to mark the beach approach as a war memorial.

With 900 tons of tuna, the Bettie M wrecked below the Cape Disappointment Lighthouse. The wreck sometimes shows during extreme low tides near Jetty A.

Start planning your trip by finding the perfect place to stay!

Sign up for monthly updates about events, things to do, and delicious food.

We never share your email with anyone, and you can opt out anytime by clicking the "unsubscribe" link at the bottom of any email.